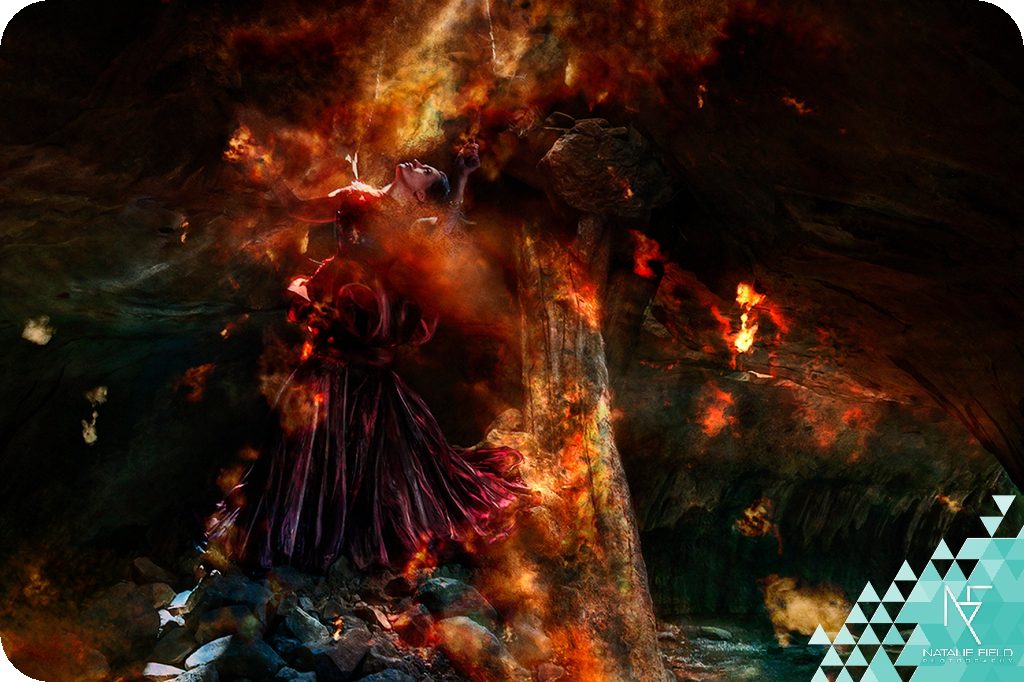 I have been working on this piece since 2014, coming back to it at various intervals. That was until I had a life-changing experience that filled me with an urgency to complete the works I have started. I experienced the overwhelming feeling of the ground rushing up towards me in an attempt to claim me back, the clock hands spinning out of control…   And through this urgency the work spoke to me (or maybe I spoke through the work)… of being engulfed, of being trapped, and being ever hopeful.  For this is the nature of the human being. Faced with the greatest of obstacles we continue to strive, or as poet Dylan Thomas put it in Do not go gently into that good night: “Rage against the dying of the light”

The concept was also inspired by the location of the shoot, a gorge and underground stream in the Free State where woman and children lived in hiding during the Second Anglo-Boer War. During this time up to 26,ooo Boer woman and children died in concentration camps in South Africa. Living in these damp tunnels must have been incredibly hard but again the will to survive transcended all.  A huge thank you to Rothman family from Affi Lande Guestfarm and Wedding Venue for showing me this wonderful space, it is a truly breathtaking landscape  and I enjoyed the Afrikaner history which stands to be forgotten as South Africans continually push to erase our past. There are none now to tell the tale, and I can only hope that history will not forget them.

I would also like to say a special thank you to my model, friend and fellow adventurer Chris Litschka; not only for being my companion on many an adventure, but also for playing along with craziness and being my muse for this artwork. I think it captures the depth of your beautiful soul.

And lastly a thank you to Rumbie by Rumbie who allowed me to take her designer label with me on this adventure so that I could capture this epic image! Thank you for trusting me and believing in my vision!

For those who are interested in my process… This image is comprised of 12 photographs taken on location. Using my Vanguard Abeo Pro 283 CGH with ball head I captured 9 photographs to stitch together a wide angle of the scene that could not be captured otherwise. I then came back to center and captured various poses of the model lit with the Photon Mobile Studio Light powered with a battery pack. These elements were all brought into Photoshop CC and combined with additional stock from my personal library. The fire and flames in the final image were created from the cloud stock, while only the burning stump was emphasized by actual burning logs. Below I have captured a few frames from Photoshop to show some of the elements used in post-production.

Should you be interested in a one-on-one retouching training session please contact me at info@nataliefield.photography for more details.

If you missed Drowning I it can be viewed here. 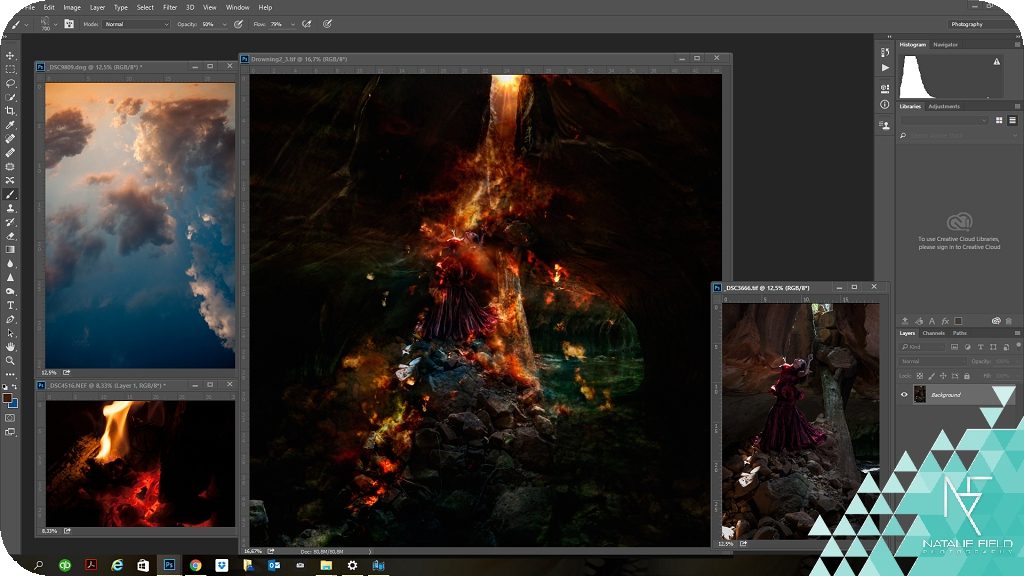 Do not go gentle into that good night

Do not go gentle into that good night,
Old age should burn and rave at close of day;
Rage, rage against the dying of the light.

Though wise men at their end know dark is right,
Because their words had forked no lightning they
Do not go gentle into that good night.

Good men, the last wave by, crying how bright
Their frail deeds might have danced in a green bay,
Rage, rage against the dying of the light.

Wild men who caught and sang the sun in flight,
And learn, too late, they grieved it on its way,
Do not go gentle into that good night.

Grave men, near death, who see with blinding sight
Blind eyes could blaze like meteors and be gay,
Rage, rage against the dying of the light.

And you, my father, there on the sad height,
Curse, bless, me now with your fierce tears, I pray.
Do not go gentle into that good night.
Rage, rage against the dying of the light.

This site uses Akismet to reduce spam. Learn how your comment data is processed.